Recently attended the Texas State Fair off the Cotton Bowl in Dallas. Dubious after an experience at the midsouth fair where I found funnel cakes PRE COOKED and stacked ready to go to taste bud deprived patrons, I was expecting the TX state fair to be slightly better but still not within the realms of gastronomic enlightenment. And I expected the rumors of fried concoctions to be exaggerated 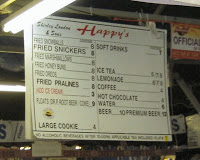 I was quite surprised at the result. In an outstanding demonstration of the free market system, the TX state fair demonstrates how carnival food service should be. 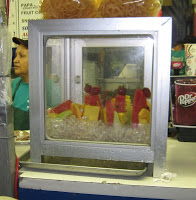 First we began with a Fletchers corny dog which is not frozen and is handdipped in batter. The resulting crunchy product far exceeded the soft breaded product of which I had only a bite at the mid-south fair.

I also had a passable Philly Cheesesteak, though I found the seasoning to be a little light and short of sufficient onion. Nearby we all split up a PAPA LOCO potato stick 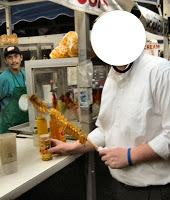 The fresh shucked corn was sweet and crunchy.

I also had a belgian waffle topped with strawberries and whipped cream that I settled on when my guide declared that the premier funnel cake vender had closed for the night already. It was crunchy and light and avoided the inevitable funnel cake drag. (why I limit myself to funnel cakes once every year or so).

Overall, a definite reason to go to dallas.

Tried Calhoun's the new sports bar on GE patterson for lunch Saturday. The cheesesticks seemed limp and the pizza was not satisfactory. I was expecting a gourment or kicked up version of the school lunch pizza, but it hewed true to the original.