Your Memphis Lawyer Gets Baked

How this all got started. (In case you were wondering).

Around the middle of my third year of law school bored of tax classes I went to the library and started flipping through practice guides. One of them was the ABA book by Larry Rice, a Memphis Lawyer who wrote the ABA formbook on divorce. Divorce law in Memphis seemed like an amusing way to pass the time.

Fast forward two years later and I’m at a reception at Bank of Tennessee (after a horrible experience at First Tennessee) and I run into Mr. Rice who mentions that he’s giving a legal education course on a cruise to train some new associates.

So in early February, 2007; I awoke one Saturday morning at 8:00 AM to catch the 6:00 AM flight to Miami. I was doing very well on sleeping but I started a blood feud with another attorney that caused a bunch of paperwork. You know how it goes.

I get to the airport in the knick of time and catch the 920 flight on Northwest which was a very reasonable 320 for a last minute ticket. Off to Miami where I spend fifty minutes waiting for the wrong carousel and catch the next to last bus to the carnival triumph calling family on the way to avoid the 2.50 a minute roaming charge on the boat.

Get on boat and I’m staying with Nick Rice, Mr. Rice’s son who also practices divorce law mainly in Memphis. We talk some and then he changes into a red polo shirt and khaki slacks for dinner.

We all had a good laugh when we realized that at dinner. Then I learned Mr. Rice and his son write somewhat wiseass letters to opposing counsel, which I’ve done naturally right off the bat since starting out. Then we both ordered the same thing for desert, at which point got kinda spooky and Nick started making gay jokes. I think.

I also met Mrs. Rice, who was a congenial short woman of Italian American heritage, similar to my mother. Mr. Rice is however really skinny and not tall and fat.

The service at dinner was excellent. The food was quality buffet type seem the best way to describe it. The meals on the ship all runs together. I remember if I ordered the steak it was uniformly overcooked, but not by much and it was quite flavorful.

The appetizers were usually quite good. It was amazing how they tried to work smoked salmon into everything. It must keep well. I remember a stuffed mushroom with a cheese sauce as a standout.

In terms of entrees, the ones by the special Chef menu were usually good though sometimes not. The duck was excellent. The Beef Wellington was very good with a generous mushroom layer which I think had a good dose of garlic, with perfectly done fillet to compliment it.

Deserts were usually good with a few exceptions. The homemade Tiramisu was very average and would have been better if it had defrosted completely. Usually anything with apples turned out well. There was a wonderful chocolate lava cake available every night. 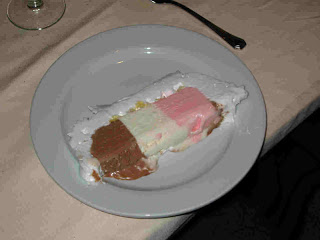 I had port 2 nights with dinner which is a great drink in small doses.

For none dining room eating, the pizza and hamburgers were quite good. I mean not the best but the pizza was crisp and better then Memphis Pizza Café and the burgers had a nice grill taste. Also they had great minute steak sandwiches.

Drinks on board ship were quite good. Watch out for the souvenir glass trick. If you don’t say they bring you the souvenir which costs $2 more and who wants to keep up with it?

The coffee shop was quite good and if you look in the bottom of the display case they had apple strudel which was great, especially with 4 espresso shots.

Carnival ships are quite retro in a love boatish sort of way. I could hardly believe it was built in 1999. The constant tipping seemed excessive, especially since there was a tip at the end of 70 and a 15 on everything. Still a good value and all tax deductible since I got 12 hours of lectures by Mr. Rice. A lot of interesting tips, but he follows the book a little too closely and since its my bible a lot of it wasn’t that new. He did encourage everyone to raise their rates though. I will definitely send anyone who wants a big bucks attorney to Mr. Rice.

The shore excursions were very interesting if short and touristy. Prices were high.

The first was San Juan where I wandered in an aimless ping pong manner until some people from the Sheraton taking off work recognized a silly tourist and gave me a ride back to San Juan old city. I visited the Le Barachina review by Rachel Ray for their coffee, sweetrolls. There were no sweetrolls that late, but I had a very interesting club style sandwich with an omelette as a layer. The coffee was okay but not wonderful. Wandered around some more and I went into a restaurant called Las Mojitos. I had chorizo stewed in wine, which was great. They stewed it long enough to soften but still have bite. The some stewed beef. Very pretty old city and capital.

Then to St. Thomas. I ate at Cousin’s which had a nice oxtail stew though not that spicy and the thickener seemed too smooth, I bet it was a quick kind. Great Plantains. Followed by a nice slice of rumcake. The light poundcake drew out the flavor. The best food was a couple hours before when I got a meat patty at a stall. I really enjoyed it.

$2>
I bought a Canon SD900 that took beautiful pictures but promptly broke the day after I got home and is now out for repairs. (Carribean is not cheap for cameras anymore and no return policy). Wish I had gone to best-buy. Took some good shots on a jeep tour around the island. All the drivers when they get going apparently get scenes airbrushed on the back of the van parts hooked onto F-350’s.

The last was St. Marteen, which was definitely the highlight though I stupidly did not buy sunscreen. (That saying is true.) So being a Memphis lawyer does not immunize one from getting baked and peeled. The French side of the island was awesome. I went to the town of Marigot where I had seagrape juice at a stand and guavaberry. The nice lady gave me some Columbo sauce which is a French brown sauce to try. She had just stewed some chicken. I also went to a pastry shop and got a really good Paris Brest and a éclair which were both really good. I then walked to the top of Fort St. Louis. 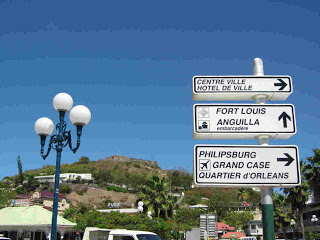 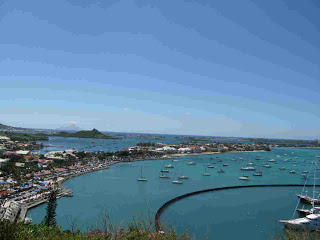 I then took a 14 cab ride to the village of Grand Cas which I heard was the place to eat. Walked around and finally settled on a restaurant called Le Soleil. Had a crabmeat with slightly candied Citron salad which was very nice and then I got a grill lobster with a risotto and vegetable sautee. It was served with a wonderfull lightened garlic butter sauce and a vinagerette relish. Really good but Caribbean lobster is not quite as good as Maine, close though. Also don’t change money on the North Side of St. Martin. You can almost always pay in dollars and most places allow you to pay in Cash at 1-1 dollars to Euros. 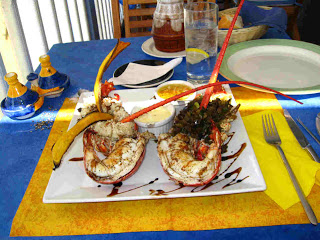 Then I went to an internet café where the lady told me to catch the Bus/pronounced Boos back to Marigot. This cost 1 dollar and the driver of the beat up van vociferously opposed any attempts at a tip. By this time I was red and feeling that burn in the back of my neck so I tried to avoid the sun.

Getting back was a travail due to all the stuff I bought. Johnny walker black was 21 a bottle! My flight was delayed at the Miami airport, I went to a Café Versailles which had Cuban pastries. I got the Guava and a meat patty. Guava had a great tangy taste to it. The patty was decent but could have been more flavorful. But for airport food it was pretty unique.