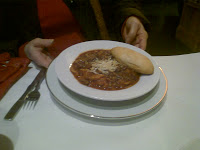 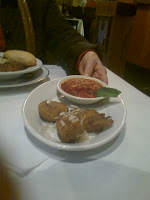 Recently finished a bit of a Veal Parmesan kick. Mother was in town to bum a ride to the airport so the before we went to Pa Pa Pia's a new Italian place downtown by parking is fun. The decor was first rate and the place seemed very cozy. Mother liked the decor.
I got the mozzarella parmesan which was little hunks of fried mozzarella, good but not outstanding. Mother started with the Minestrone which she disliked intensely as it had the texture of chili, being way too thick for a minestrone, Italianish Chili would have been appropriate.
I then had the veal parmesan which was very mediocre if edible. It was overly thick and at first I thought it was food service but the breading matched the mozzarella so it was clearly not, which was discouraging. Mother had the mussels which had an intriguing smoky wine sweet broth, and would have been quite good if heated further.
I commented to mother that I thought I should go again to make sure I was being fair, Mother said she thought it was unnecessary. Paul Rayburn thought it was good in his blog so I'm thinking of going back. I would note that his crew got items with less breading. I talked to the waitress briefly who gabbed the place was an original being run by the same people who did Mesquite Chop House and Rum Boogie.
My impression was it was a food service aspirant.
Trying to make it a theme, I went to Pete and Sams one night over on park. I remember going there as a kid. They had an okay veal parmesan dinner. The highlight of which was the sausage pizza side. The italian spinach was okay but short on the egg white. The toasted ravioli were a low point with an overly breaded food service ravioli. The prices were excellent though, the place hasn't apparently raised prices since I was a kid.
Completing the venerable Italian places I went to Brooklyn Bridge Italian Restaurant which I remember as being quite good. It was again mediocre, better than Pa Pa Pia's but lacking a well cooked crispness, it was also better than Pete and Sam's but I'm sure it was twice the price better. They did have a quite good tiramisu. 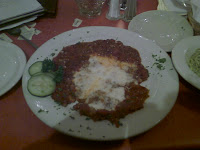 Grisanti's on the high end and Macaroni Grill for the more pedestrian both outshine the above.
Posted in
no comments yet
Please enable Javascript to comment on this blog